Added to wishlistRemoved from wishlist 0
Add to compare

Pressure Cooker Cookbook Bundle: Over 60 Recipes To Help Save Time and Make Delicious Meals Both You & Your Family Will Love (The Essential Kitchen Series)

Added to wishlistRemoved from wishlist 0
Add to compare
£19.77 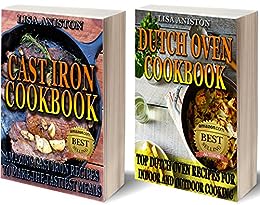 For A Limited Time Two Cookbooks For A Price Of One! Get Now!

Get This #1 Selling Cast Iron Cookbook Now And Get Amazing Recipes Along With My Special Gift Just For You!

Most people have no idea that making the most delicious foods can take only one simple and time tested tool – cast iron skillet.

Good taste is not the only thing that they are missing out! Cooking with cast iron cookware can offer many benefits besides amazingly tasting meals. Cast Iron Skillets last forever and cooking in cast iron skillet can increase dietary iron levels in your food!
There are much more benefits you will learn in this cast iron cookbook.

This cast iron cookbook will give you 35 the best cast iron skillet recipes you can make in a very clear and easy to understand fashion. Delicious meals from seafood to vegan, from steaks to deserts. You will find it all here. Make these mouth-watering cast iron recipes today!

It’s Time To Prepare The Most Delicious Meals With This Dutch Oven Cookbook!


Dutch ovens are great for outdoor cooking as well as indoor. Dutch ovens are very versatile – you can cook virtually anything and any way you want, however, they are mostly used for recipes that has long cooking times like soups and stews. You could say that Dutch oven is classical and much more versatile version of modern slow cookers.

However, Dutch oven is no good without great cookbook that will allow you to make the most delicious meals. This cookbook will give you the magic key to making the best of your Dutch oven by preparing delicious, mouth-watering meals for you and your family to enjoy.

In this book you will find great selection of the best recipes that can be made using your Dutch oven that are very easy to understand and follow. Clear and simple directions to tasty meals, that’s what this book provides. Enjoy!

There are no reviews yet.